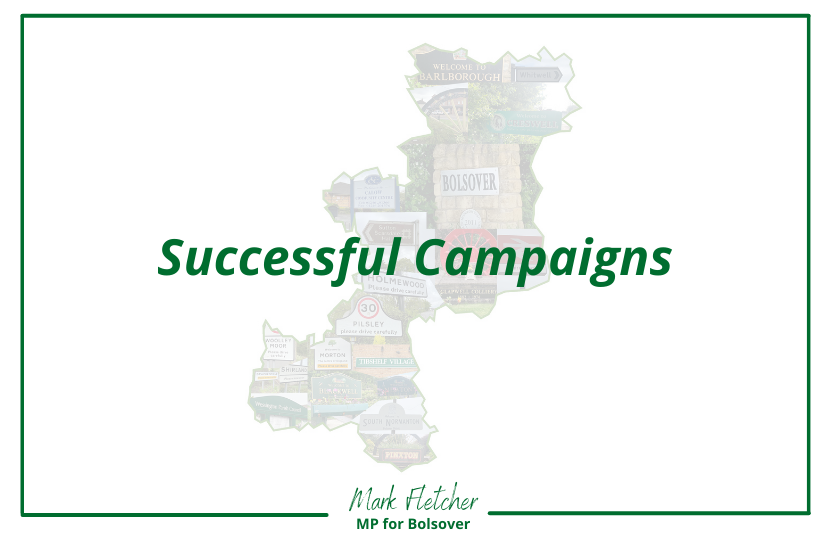 This page shows the successful campaigns I have been involved in throughout the Bolsover constituency. If you would like to know more details about any of these campaigns please do not hesitate to email me on mark.fletcher.mp@parliament.uk.

Stopping HS2 in our constituency

In the Bolsover constituency the proposed route for HS2 snaked around the M1 several times causing untold delay and disruption for my residents. Plans for major infrastructure projects, such as improvements to Junction 29 of the M1, could not be finalised due to the uncertainty caused from HS2. And communities would have been devastated by the proposed route.

But for what benefit? It seemed to me that we were suffering all the pain of HS2 without any gains. The project would not have been delivered for another 20 years and I have long argued for the money to be spent on local transport projects.

I am absolutely delighted that the Government has announced that HS2 Phase 2b (Eastern Leg) will no longer go as far north as the Bolsover constituency and will instead terminate at East Midlands Parkway. This will be a massive relief for residents across the constituency, in particular for those living in communities along the route which would have been devastated by HS2.

Over the last few years I have supported the campaign for the full electrification of the Midland Mainline from London St Pancras to Sheffield. I am absolutely delighted that this project was included in the Government's Integrated Rail Plan announced on the 18 November with work expected to start in December 2021. This announcement means quicker train services for residents using Chesterfield Station. Without the extortionate cost or devastating impact on villages associated with HS2. Ultimately, electric trains will improve service reliability and increase train and line capacity, whilst also being more environmentally friendly.

During the 2019 General Election, I campaigned for more affordable housing for people across the Bolsover constituency. In June, the Government launched a new First Homes Scheme, which provides at least a 30% discount for first-time buyers who are from the surrounding area or a key worker, in Shirebrook. I will continue to support the Government, Bolsover District Council, and Keepmoat Homes in the rollout of this project to help ensure local residents can get on the housing ladder.

After residents got in touch with me regarding the condition of the pavement at Sandwood Close in Newton, I spoke to Derbyshire County Council (DCC) about smoothing out the pavements.

I was delighted that DCC agreed to complete the maintenance work as soon as possible and I am extremely grateful for the residents who brought this to my attention.

A number of residents contacted me regarding the poor condition of the road outside Wilkinsons in Clowne. I contacted the County Council’s Highways Department with photographs of the numerous large potholes and poor surface condition, and I was delighted once the road had been resurfaced to a higher standard.

In April 2021, I met with Cllr Janet Tait and Cllr Christine Dale to discuss their concerns with the condition of Church Drive in Shirebrook. Road users had become increasingly concerned about the number of potholes as well as the road’s general surface.

Following my discussions with Derbyshire County Council, Highways have agreed to carry out repairs on the road and added it to the list of roads to be considered for resurfacing next financial year.

I teamed up with local councillors Tom Munro and Duncan McGregor to improve road safety at Bakestone Moor.

After concerns had emerged from residents regarding road safety at Bakestone Moor in Whitwell, local councillors Munro and McGregor invited me to see first-hand some of the concern’s residents had. Following the meeting and speaking to residents I agreed to speak to Derbyshire County Council to discuss potential solutions and the installation of signs.

After discussions with the Derbyshire County Council, new signs will now be installed at Bakestone Moor, including better signs for the bend in the road and markings to show the start of the 30 MpH area.

Following my Whitwell Village Hall meeting and concerns raised by residents, I asked the County Council to consider countdown count down markers for the entry into Whitwell and I am delighted my suggestion will now be implemented, with work set to begin in 2022.

In the March 2021 Budget, the Chancellor announced the East Midlands Freeport bid had been accepted, making it easier and cheaper for businesses to invest and do business in the region – turbocharging the regional economy and benefitting the Bolsover constituency in the process.

I am proud of my part in the campaign to establish an East Midlands Freeport which could bring up to 80,000 jobs and sees £1bn of investment into the the region.

I’m incredibly pleased that the Government is committed to delivering its manifesto pledge to level-up the whole of the UK, including making direct investments into the East Midlands

In March 2021, myself and the Leader of Bolsover District Council, Cllr Steve Fritchley, received a response from the Leader of Derbyshire County Council, Cllr Barry Lewis, confirming that the County Council has committed resources to an initial feasibility study into access to Shirebrook, with a potential additional £150k of support if the project makes enough progress.

The County Council also understands the connectivity challenges faced by Shirebrook, recognises Shirebrook’s regeneration potential and has included the concept of the Shirebrook Link Road in its Local Transport Plans.

This commitment from the County Council into recognising the issues and potential of Shirebrook is vitally important as I continues to campaign for investment into infrastructure as part of plans to level up the Bolsover constituency and regenerate our area.

By improving transport links and access to local towns it will provide a huge boost to local plans to attract high quality jobs and further investment into the area.

Having spoken with the Secretary of State for Digital, Culture, Media and Sport on a number of occasions about support for tourist sites effected by the pandemic in my constituency, I was delighted that Bolsover benefitted from over £1.28 million of support from the Culture Recovery Fund, which included over £400,000 for Creswell Heritage Trust.

A number of residents contacted me regarding road safety for children near Bolsover Junior School on Horsehead Lane. Having contacted Derbyshire County Council they agreed to install a Traffic Regulation Order (TRO) and highway signage on Horsehead Lane, as well as school warning signs on the approaches to the school.

Having spoken with the Secretary of State for Digital, Culture, Media and Sport on a number of occasions about support for tourist sites effected by the pandemic in my constituency, I was delighted that Bolsover benefitted from over £1.28 million of support from the Culture Recovery Fund, which included over £400,000 for Bolsover Castle.

In the summer of 2020, myself and Cllr Steve Fritchley, Leader of Bolsover District Council, signed a joint letter in support of the reopening of the Maid Marian Line and agreed a list of priorities for the District, including the creation of a new station for Pinxton.

I am very pleased to hear that the Creswell Heritage and Wellbeing Centre has been given the green light meaning construction can begin next year, with the hope of opening by Christmas 2022.

Earlier this year I wrote to the Secretary of State in support of this project which will have great social, physical and mental health benefits for residents of Creswell.

A massive thank you to Cllr Duncan McGregor who has led on the project and for his vision and leadership for Creswell.

I am very pleased to hear that the Creswell Heritage and Wellbeing Centre has been given the green light with construction to begin next year, hoping to open by Christmas 2022.