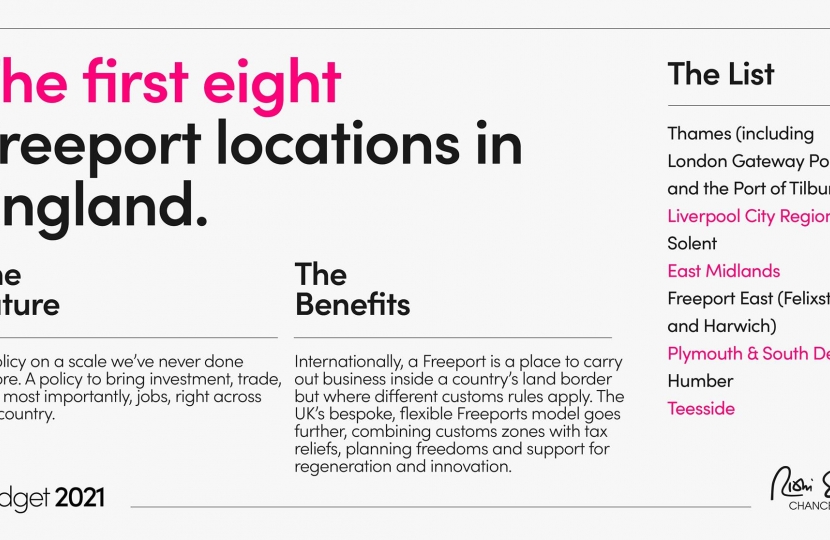 Mark Fletcher has spoken in favour of the successful East Midlands Freeport bid that was confirmed in the Chancellor’s Budget announcement on Wednesday 3rd March.

The bid was a collective effort from all of the East Midlands MPs, as well as council leaders, the local enterprise partnership and various private companies and is expected to act as a massive shot in the arm for supply chains and firms across the region, including in Bolsover.

The Budget contained several announcements as part of the Government’s commitment to levelling up in the North and the Midlands and providing the funding for these areas to benefit from emerging, skilled industries. The Chancellor announced £1 billion of funding for the UK’s new towns deals, with £24.1 million being awarded to Clay Cross, transforming the town and vastly improving the local high street and town centre. The Towns Board will also be working with Bolsover District Council to explore towns within the constituency to help prepare a bid for the next round of funding. The first round of bidding has also opened up for the £4.8 billion Levelling Up Fund and Mark looks forward to working with local stakeholders to submit proposals in due course.

“The Chancellor’s budget on Wednesday laid the groundwork to deliver on the Government’s manifesto pledge to ensure that we level up the whole of the UK – including right here in the East Midlands. Perhaps the biggest boost to our region was the announcement of a new East Midlands Freeport – bringing up to 60,000 jobs to the East Midlands. The new freeport will make it cheaper and easier for business to set up and conduct their business, attracting investment and development into our region – it will be a game-changer for our part of the world. I’m incredibly pleased that the Government is committed to delivering its manifesto pledge to level-up the whole of the UK, including making direct investments into the East Midlands.”

Mark has been campaigning to bring investment to Bolsover since he was elected and has been working to bring in new skilled jobs as part of the green recovery from Covid-19. The successful East Midlands Freeport bid has been a major project and will form a huge part of that ambition, attracting major investment and bringing in tens of thousands of new, highly skilled jobs to the area.