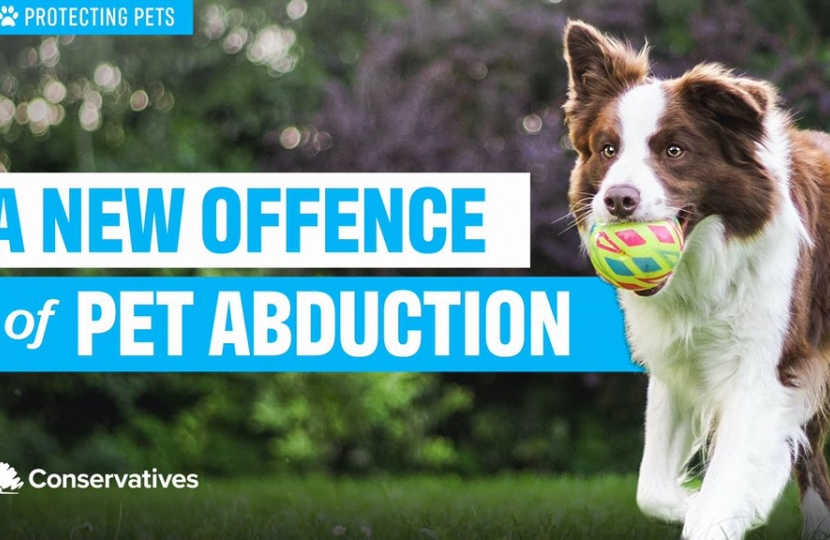 Mark has welcomed the findings published by the Pet Theft Taskforce to help combat the growing criminal activity around the theft of pets.

Over the course of the pandemic, many people sought to bring a pet into their families to help with the isolation of lockdown. The result has been soaring prices for new puppies and a rise in the theft of dogs as criminals look to capitalise on the situation.

That’s why the Government has published the findings of the Pet Theft Taskforce’s findings as well as its proposals to help crackdown on criminals that look to cause hurt to families.

The proposals include recommendations to introduce a pet abduction office, as well as increasing the amount of information on microchip databases and improving data collection on pet thefts by the police.

It is hoped that the plans will help to tackle the new trend that started to emerge last year during the lockdowns.

Back in June, Mark spoke in the House of Commons, pledging his support for the establishment of the Pet Theft Task Force after speaking to residents who had sadly fallen victims themselves.

Commenting on the proposals, Mark said:

“I’m really pleased to see the Government publish the findings of their pet theft task force. It’s been so heartbreaking to speak to constituents who have been impacted by this issue over the last 18 months.

“As a dog owner myself, I know how important our pets are to the family. I’m determined to support the Government as much as possible in getting this legislation into place and making sure we crackdown on the gangs and criminals that are looking to split up families from their four-legged companions.”

Last week, Joe from Bolsover joined my team in Westminster, and in my constituency office, for some Work Experience. Joe is studying his A'Levels at Dronfield Henry Fanshaw School, including in Politics.