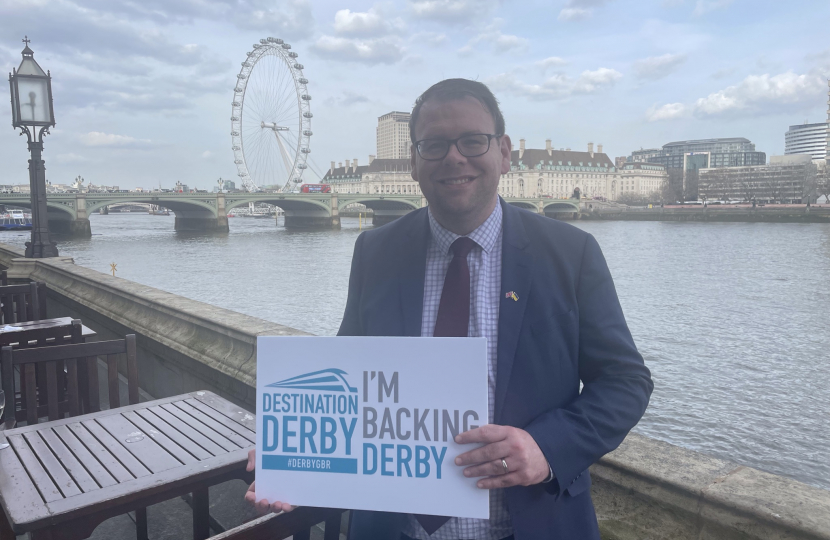 Last month the Department of Transport launched a nationwide competition to find the new headquarters of Great British Railways (GBR). I am delighted to be backing Derby.

The headquarters being based in Derby will bring a number of high-skilled jobs to the area and support levelling-up across the East Midlands.  Local MPs, Derby City Council, D2N2 LEP, Toyota and East Midlands Chamber of Commerce are among those backing efforts to bring GBR to the city.

Derby is an ideal location for GBR to be based, home to the oldest surviving railway Roundhouse in the world built by Robert Stephenson and the central location has attracted some of Europe’s largest rail engineering companies including Alstom (previously Bombardier), Porterbrook, Railcare and Resonate.

With the East Midlands Freeport in place from March 22nd 2022, and set to deliver 61,000 jobs and an extra £8.9 bn for the local economy over the next 30 years, The East Midlands Intermodal Park (EMIP), which will become a next-generation, rail-connected business park with links to the rest of the country and beyond, and Ratcliffe-on-Soar power station due to be transformed into an international centre for the development of zero carbon technology, we are transforming the East Midlands through economic growth, bringing opportunities and skills to our region.

Delivering the road, rail, cycling and energy improvements we need to see across the constituency to improve our daily lives and improve our local economy.

Mark meets with Minister for Safeguarding about Anti-Social Neighbours

Sadly, anti-social behaviour can have an overwhelming impact on its victims and, in some cases, on the wider community.