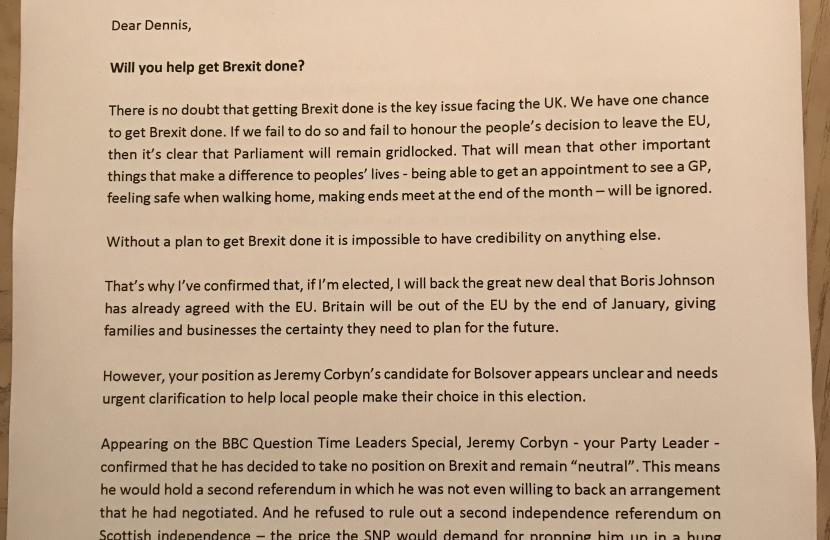 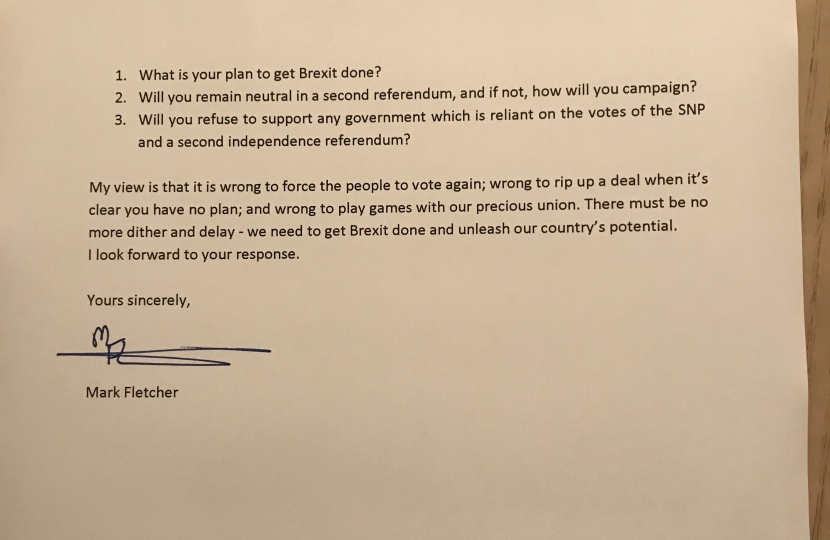 Yesterday I wrote to Dennis Skinner asking him whether he agrees with Jeremy Corbyn's decision to remain neutral on Brexit, and to answer three key questions about his position for the people of Bolsover:

You can read the full text of my letter below.

Will you help get Brexit done?

There is no doubt that getting Brexit done is the key issue facing the UK. We have one chance to get Brexit done. If we fail to do so and fail to honour the people’s decision to leave the EU, then it’s clear that Parliament will remain gridlocked. That will mean that other important things that make a difference to peoples’ lives - being able to get an appointment to see a GP, feeling safe when walking home, making ends meet at the end of the month – will be ignored.

Without a plan to get Brexit done it is impossible to have credibility on anything else.

That’s why I’ve confirmed that, if I’m elected, I will back the great new deal that Boris Johnson has already agreed with the EU. Britain will be out of the EU by the end of January, giving families and businesses the certainty they need to plan for the future.

However, your position as Jeremy Corbyn’s candidate for Bolsover appears unclear and needs urgent clarification to help local people make their choice in this election.

Appearing on the BBC Question Time Leaders Special, Jeremy Corbyn - your Party Leader - confirmed that he has decided to take no position on Brexit and remain “neutral”. This means he would hold a second referendum in which he was not even willing to back an arrangement that he had negotiated. And he refused to rule out a second independence referendum on Scottish independence – the price the SNP would demand for propping him up in a hung parliament.

Voters in Bolsover deserve to know what you would do. Can you clarify it for them by answering the following four questions:

Do you agree with Jeremy Corbyn’s decision to remain neutral on Brexit?

My view is that it is wrong to force the people to vote again; wrong to rip up a deal when it’s clear you have no plan; and wrong to play games with our precious union. There must be no more dither and delay - we need to get Brexit done and unleash our country’s potential.

I look forward to your response.

A Statement from Mark about Kingsmill Hospital and Covid-19 preparations

This afternoon I joined a call with the Chief Exec of Sherwood Forest Hospitals NHS Foundation Trust, Richard Mitchell, along with local MPs Lee Anderson (Ashfield) and Ben Bradley (Mansfield), to discuss the situation relating to coronavirus in our local hospitals.